Being a loser makes Karen a winner! 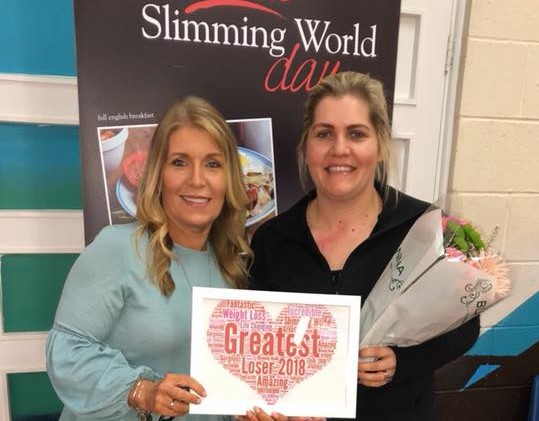 Being the best at losing wouldn’t normally help you to scoop an award – yet one Karen Geraghty from Clondalkin has done just that after being named the town’s ‘Greatest Loser’ 2018.

That’s because Karen has lost an amazing 3st 8.5lbs to take the title, which is awarded to the member of the Bawnogue Slimming World group who has lost the most weight, and feels fabulous as a result. Karen, says: “There’s absolutely nothing wrong with being a loser when it feels this good! I feel like a new woman since losing weight – in fact, I look so different that people who I haven’t seen for a while often can’t believe I’m the same person. For me though it’s the change on the inside that’s been the greatest – I’m happier, healthier and much more confident now.”

The proud 34-year-old joined the Bawnogue group, which is run by Sharon Fitzpatrick, in July 2017. Karen says: “My weight impacted on so many aspects of my life, from struggling to find clothes that I like to fit to not being able to do simple everyday tasks without feeling tired and out of breath. Before I lost the weight I hated having my photo taken and whenever I saw pictures of myself I knew that my smile wasn’t real – yet now I’m beaming!”

People who are severely overweight, with a BMI* above 30, are more likely to suffer from health problems like coronary heart disease, arthritis, diabetes and cancer, and obesity is linked to a reduction in life expectancy of between seven and nine years.

After hearing about Sharon’s group opening on July 17 2017 from my sister. Karen  decided to join herself the following week “Walking through those doors was one of the hardest things I’ve ever done, I was embarrassed about my size and scared that I might be the biggest person there. I needn’t have worried though, everyone there was sofriendly especially my Consultant Sharon and I was so relieved when I found out that my weight was confidential – I’d had visions of having to tell everyone how much I weighed! “Since then I’ve made so manyfriends at the group and I honestly don’t think I could have done it without their support each week. They helped me with recipes and tips and if I was ever struggling they were always there to remind me why I’d wanted to lose weight in the first place and how far I’d come since first stepping through the doors.”

Karen followed the club’s Food Optimising eating plan and swapped take away meals for lovely homemade bolognese and shepards pie’s . She
says: “People think slimming means going hungry, eating nothing but salad or obsessively counting every calorie you eat, it’s not likethat at all with Slimming World though. I love food and it’s neveronce felt like I was on ‘a diet’ – in fact, people are always surprised at how much food I have on my plate and can’t believe I’m losing weight eating so much delicious food and without ever feeling hungry.

“I still enjoy all my favourite meals like burgers and chips and roast dinners but I’ve learned how to make small changes like using leanmeat or cooking with low calorie spray instead of oil or butter. It fits in really well with the rest of my family and we can all eat the same meals. I know that I haven’t ‘gone on a diet’, this is a change that I’ve made for life and have the tools I need to keep up forever.”

Sharon, who runs the Bawnogue Slimming World group, says: “The changes we’ve seen in Karen are incredible. I hope her success will inspire other people in Clondalkin who’d like to lose weight by forming new lifestyle habits and become happier and healthier to take action. There’s a warm welcome waiting at Slimming World and, just think, if you start today you could feel like a completely new person just like Karen.