Annual all Ireland convention of the Irish Ahmadiyya Muslim Community 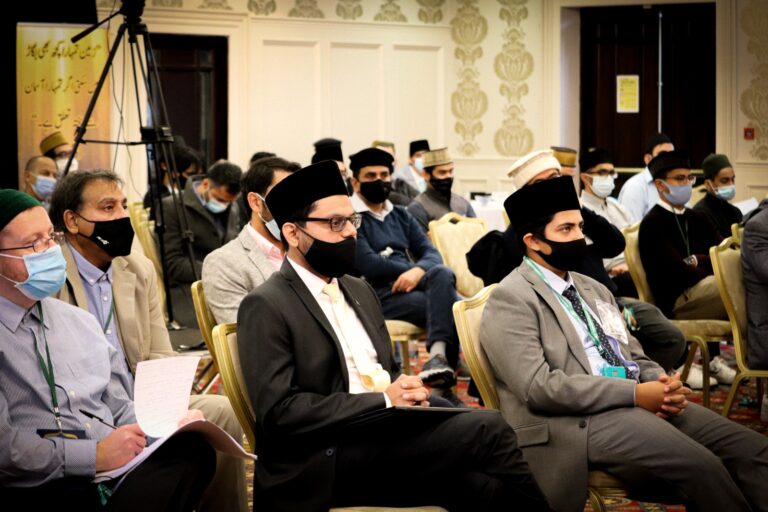 Annual all Ireland convention of the Irish Ahmadiyya Muslim Community takes place in Dublin to promote peace, tolerance and social co-operation. The Irish Ahmadiyya Muslim Association held its 19th Jalsa Salana (Annual Convention) on the 3rd of August 2021 at the Glenroyal Hotel, Maynooth Co. Kildare. Muslims from all over Ireland attended the convention to reaffirm their commitment to the spiritual and peaceful teachings of their Islamic faith and to reject extremism and promote openness, tolerance and pluralism.

This year due to covid restrictions the numbers of attendees were limited however the convention was also streamed live so that others who could not attend could take part in this much anticipated event virtually. The restrictions however did not dampen the mood and there was a notable atmosphere of fellowship and a feeling of happiness that the community was once again able to come together nationally after over 18 months of restrictions and lock down. The event organizers ensured that the covid regulations were followed with vaccinations certification confirmations and checks, masks, social distancing, Rapid antigen testing as well as having medical professionals on hand.

The convention began with a flag hoisting ceremony at 10:00am in which the Irish Tricolor and the flags of the four provinces were raised by the President of the Irish Ahmadiya Muslims Association Dr. Anwar Malik and Waterford native, Imam Ibrahim Michael Noonan, Missionary in Charge for the community and the Imam of the Galway Mosque

The convention proceedings included addresses from speakers on religious, social and ethical issues relative to living in faith. To promote higher learning the annual educational awards were announced for members of the community who excelled in their educational and professional fields such as junior cert, leaving cert and university exam results as well as outstanding achievements in the field of scientific research. Overall, over 23 awards were announced.

The event also features a message from the head of the worldwide Ahmadiyya Muslim Community His Holiness Hazrat Mirza Masroor Ahmad the 5th and current Khalifa of the Worldwide Ahmadiyya Muslim Community. He encouraged the members to continue their work to promote a more progressive understanding of Islam and to work towards realising the true peaceful teachings of Islam within their lives and the wider society.

An important part of the annual convention has always been the inviting of dignitaries such as the Mayor, Government ministers & TDs, Councillors and representatives from the civil services such as An Garda Siochana to address the attendees. However, this year due to the restrictions these dignitaries addressed the convention via recorded video and written messages.

Mayor of South Dublin Cllr. Peter Kavanagh sent a video message to the community in which he said “I want to thank the Ahmadiyya Muslim community for their tireless dedication they have to their own charity work and outreach throughout what has been a very difficult time for people all over the world. The light which you shine, the beacon of hope which you offer is an inspiration to other communities throughout the country”

Some of the other notable video messages were from the Minister for State at the Department of Health Frank Feighan T.D. He said “As a community you are founded on a mission of spreading peace and love. And this unique convention reinforces that commitment to be of benefit to society and to be of service to humanity”

Jack Chambers TD Government Chief Whip & Minister of State for Sport, the Gaeltacht & Defence addressed the gathering and said of the communities charitable and fund-raising efforts even during the pandemic “…despite this your community has done some wonderful charitable work … [which]has not only been admired by myself but also many of my colleagues and people across the country”

Deputy Emer Higgins TD said “The Ahmadiyya Muslim Association are invaluable members of our local community. I really enjoyed being able to further my relationship and build that link with members of the community since being elected as a TD last year”

Paula Hillman assistant Garda Commissioner also addressed the gathering by recorded video message. The Assistant Commissioner outlined the Gardai’s commitment to engaging with communities right across Ireland and also encouraging members from diverse communities to come and work with An Garda Siochana. She thanked the community for their openness and willingness to engage. She said “I do, thank you for your engagement with us ..  and I know it will go from strength to strength as we continue moving out of covid. I wish you all the very best and I look forward to seeing you soon”

Motto of the movement is “Love for all, hatred for none”.