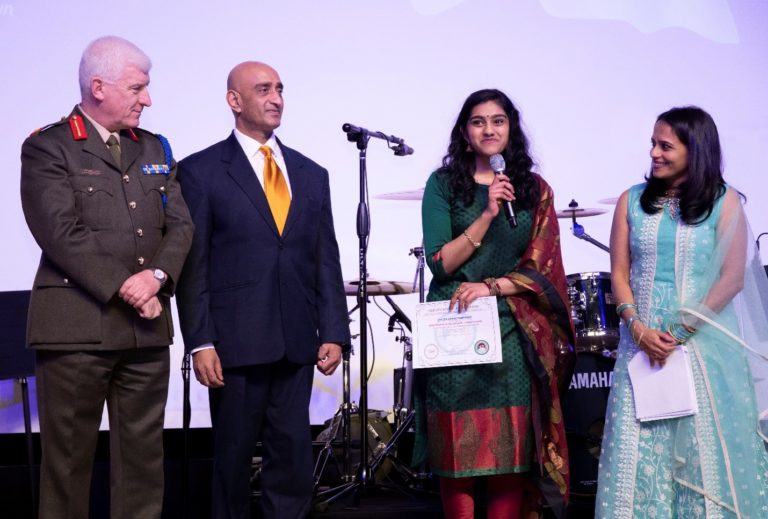 Talented Indian youth honoured by the Ambassador of Ireland and Brigadier General O’Halloran on behalf of Óglaigh na hÉirean.

On the 26th January the Confederation of Indian Communities in Ireland (CICI) was joined by a number of dignitaries, including the Ambassador of India to Ireland, His Excellency Mr. Sandeep Kumar and Brigadier General Peter O’Halloran on behalf of Óglaigh na hÉireann to celebrated the 70th Republic Day of India which marks the coming into effect of the Indian Constitution. The festivities included Indian and Irish cultural performances and an official address by the Ambassador of India and Brigadier General O’Halloran.

“Republic Day is one of the two most important national holidays in India that commemorate key historical events. India became an independent country on 15th August 1947. Two and a half years later, on 26th January 1950 its Constitution came into effect to complete the transition process of India becoming an independent republic.” said Dr. Dilip Mahapatra, Chairman of Confederation of Indian Communities in Ireland. He also said that the main objective of CICI is to integrate all different Indian communities into one umbrella organization along with participation of the Irish communities to celebrate multicultural events and to support other community projects with the help of the CICI executive members and CICI volunteers. In the last 7 decades, India has attained remarkable achievements in the fields of science, technology, education and more. The International Monetary Fund Database of October 2018 projects India to be the fastest growing major economy in the world for 2018-19 and 2019-20.

To emphasise the prosperity and the rich cultural and intellectual potential of the Indian community, and as part of the Republic Day festivities, CICI honoured a number of young people for exceptional achievements in the areas of sports, arts and science. The awards and certificates were presented by the Ambassador of India and Brigadier General O’Halloran. Some among the awardees were Pravesha Ragi, Leinster Champion in Table Tennis for 2016, 2017 and 2018, Gold Winner in 2018 Singles and Doubles National Championships; Gautam Rana Akkepalli – a 7 year old passionate Cricket player who magically took 10 wickets in a match and received YMCA award in 2018; Bagmi Pragyan Jaysingh – a very talented and multiple award winning dancer who has been honored with the Jogini Award in 2009, Chinta O Chetana award in 2010, Bhubaneswari award in 2011, Nrutya Natika award in 2012; Saptha Raman – performer of various dance forms including Mohiniyattam, Bharathanatyam, Kuchupudi, folk dance, Bollywood, Irish Dance and Western Dance, semifinalist in Super Dancer Junior 7 reality show in 2013, winner of the World Dance Championship in 2015 amongst 1,600 participants from 32 countries, Best All Round Performer and Best Dancer in the Keli International Kalamela 2018;

Ravikanth Gollapalli, who became the chief technology officer of a non-profit organisation in his secondary school. Along with his team Ravi had mapped Lesotho, an enclave country within the border of South Africa. The project entered a social entrepreneurship competition called SAGE (Students Advancement for Global Entrepreneurship) World Cup in Ukraine where it took 1st place among competition from around the world. Ravi is now studying Computer Science in UC. The Confederation of Indian Communities in Ireland (CICI) is a not for profit umbrella organisation embracing various Indian groups and societies. By offering support to its members and by expanding social and educational services and providing advice how to get health issues resolved through available primary and secondary within the state. CICI aims to unite and encourage the entire Indian community to work together as one group on common issues for the benefit of all people of Indian origin in Ireland, Non Resident Indians and Indian students studying in various universities of Ireland. CICI promotes a culture of complete  integration in all aspects of social life with the host community in Ireland.