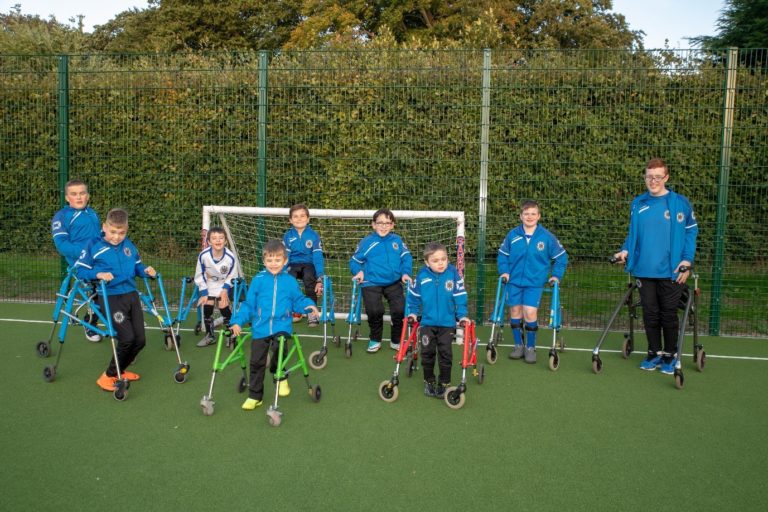 The FAI’s “Football for All” Programme is a network of clubs who provide opportunities for children with specific needs who may struggle to excel in the competitive environment of underage football or who need additional supports to develop as footballers. The local club, Esker Celtic, have developed a “Football for All” programme that is designed to cater for players who require the use of a walker style frame and also to those who feel that they can compete more equally by using these frames. The game is played using the frame as an aid with the basic rules of Football in 4v4 or 5v5 games. The pitch at Hermitage will be the first of its type that specifically caters for frame football players.

South Dublin County Council, with the support of the FAI, contracted Sports Labs Ltd. to design the specialised surface, in consultation with the Esker Celtic Frame Football team and contracted Mc Sweeneys Ltd. for the build of the pitch over the summer months. Speaking at the event Mayor Cllr. Mark Ward said “This opening ceremony marks the delivery of a significant project that will allow frame-users to participate in team sports at a purpose-built venue here at Hermitage Park.” “This project was delivered by SDCC and the FAI and helps to ensure that sport is inclusive for people of all ages and abilities. I would like to acknowledge the role of the FAI for their support and attention throughout this process to ensure the delivery of this innovative project.” “This pitch was specifically designed to cater for the footballing needs of children who currently travel from all parts of the country to participate in the ‘Football for All’ programme with Esker Celtic Football Club. We would like to thank the club members for their assistance in testing the various surfaces to ensure we get the best possible surface for this new facility. We would also like to show our appreciation to the club for being very accommodating during the construction period. Organising matches and camps during this time involved added pressures and we thank the club sincerely for their co-operation.”

John Delany, Chief Executive of the FAI said “This new pitch in Hermitage Park is key to the Association’s ‘Football for All’ strategy and culture. We want everyone to be given the opportunity to play football irrespective of their ability.” He continued, “Working with South Dublin County Council and Esker Celtic, we know now that more players of all abilities will be able to play the game they love.”

Colm Young, vice-chairman of Esker Celtic Football Club said “Esker Celtic F.C. would like to thank SDCC and the FAI for having the vision and foresight to provide a much welcomed and needed disability footballing facility for the wider community of Lucan. Our fame and amputee footballers now have a place to call home.” Also speaking at the event Paul Cleary, chairman of Esker Celtic F.C. said “Esker Celtic Football Club are very proud to be associated with the new purpose built facility constructed in Hermitage Park by South Dublin County Council and the Football Association of Ireland.” “The facility will enable all the children in the club to be more involved in the sport on a regular basis regardless of their ability.  The club will look forward to players travelling from afar to use the facility and open up the opportunity to have games across various clubs.” “We are looking forward to welcoming teams representing the Football Association of Ireland to this facility and to assist them in any way we can. Congratulations to all involved in delivering this project and we hope to play our part in ensuring this facility will be a success.”

Cllr Vicki Casserly Mum of James Casserly who plays frame football commented “I was hugely proud to join the Esker Frame Team for the official opening of Ireland’s first frame football pitch. Between the club, South Dublin County Council and FAI & John Delaney’s belief in the growing sport and players, kids of our future have their wish of equality in football”